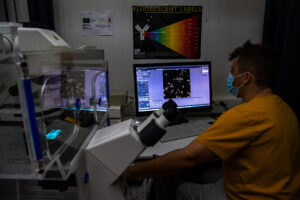 QUESTION: Dr. Sylvain Tollis, could you briefly introduce yourself.

Sylvain: I come from a small city in France named Clermont-Ferrand, where I studied applied mathematics up to the B.Sc. level. Then I moved to Bordeaux to do a PhD in the field of condensed matter theory. I modeled what happens when you put in contact two metals that have opposite magnetic properties: ferromagnetic metals, the ‘magnets’ we put on the fridge, and superconductors, from which the magnetic field tends to be expelled. Due to this antagonism, such junctions have unique properties that are interesting for quantum computing. I did a first post-doc in this field in Lausanne (Switzerland), but I was captivated by major biology discoveries of the 2000’s and decided to move towards biological physics.
Robert Endres at Imperial College London gave me the opportunity to initiate this career transition, and I started working on the biophysical modeling of phagocytosis and bacterial chemotaxis. During these years I learned a lot about cell biology, and I became fascinated by the question of how one cell takes the decision to divide into two, this so peculiar trait of living things. I started modeling the cell division cycle with Derek McCusker in Bordeaux. I realized soon the importance to combine experimental capabilities with analytical expertise, and I was fortunate to find an additional training in experimental cell/molecular biology and advanced bio-imaging in Mike Tyers’s laboratory in Montreal. There, I have contributed to many different projects ranging from microscopy-based screening of therapeutic molecules to the characterization of non-coding RNAs. But during this time, my research focus has remained the control of the cell cycle trigger, which is still an open fundamental question despite over 150 years of research on this topic.

Q: What persuaded you to come to Finland and Kuopio?

Sylvain: Well, maybe first from a personal perspective, I love spending countless hours in the boreal forest and Finland is an ideal spot for this. Then, from a professional perspective, I was looking for a place where I could develop new things, be useful and creative. And where I would have the freedom to do so. I had this feeling that UEF would be such an environment, where credit and support would be given to new initiatives, because the University is in a growing phase. And I can say now after 2 years that my intuition was quite right: I get a lot of support from my supervisors when I want to develop new ideas, and I also get a lot of stimulating interactions that help me to think about my research problem with different angles, through different prisms and to somehow think outside the box.

Q: What is the main aim of your research project and how it relates to childhood cancer?

Sylvain: My ambition in research is to understand how cells make decisions, at the molecular level. Decide to rest, to grow in volume, to divide in 2 cells, to change their physiological nature (a process called differentiation, through which for instance stem cells produce the different cell types of our organism), or even to commit suicide.  And among all these decisions, the decision to divide is key because once the cell commits to division, it is mostly irreversible and therefore no other decisions are made before the daughter cells are born.  Hence, I am focusing my research on the question of how the cell decides to divide, a decision that constrains other cell fates.

This question is critical in cancer research in general, and in childhood leukemia in particular. Indeed, cancer arises from bad decisions, when cells decide to proliferate (which involves too many divisions) rather than doing other things, like differentiating or staying silent. In leukemia for instance, immature pre-B cells escape differentiation and multiply uncontrollably, leaving the bone marrow with strong proliferative potential. In addition, the high rate of relapse in childhood leukemia is thought to stem from the existence of a small number of ‘resting’ cells, on which anti-proliferative chemotherapies are inefficient because those cells don’t divide actively. Yet, they have this potential to re-activate division later on. Hence, we need to understand how they re-enter the cell division cycle, in order to prevent relapse.

Q: You have been working with genes that regulate cell cycle and growth in yeast. How do you translate findings in yeast to humans?

Sylvain: In the past four decades, the yeast model organism has been very successful in predicting core cellular processes in higher organisms. Many discoveries made on yeast have been extended to human. As examples, we could cite the Nobel recipients Randy Schekman who discovered how yeasts organize their intracellular transport (using vesicles), a system that James Rothman later shown to be very similar in mammalian cells. We could also cite Paul Nurse, Leland Hartwell and Tim Hunt who discovered the proteins that orchestrate the cell division cycle in fission yeast, budding yeast and fertilized sea urchin eggs respectively in the late 1970s/early 1980s. And the key point is there: the molecular circuitry that controls progression through the cell division cycle is evolutionary conserved from yeasts to plants to mammals. Of course there are some differences: there are maybe 2-3 times more cell cycle proteins in human than in budding yeast, likely because human cells are part of a multicellular organism encompassing multiple layers of regulation. Therefore human cells need to adequately respond to a broader range of stimuli, which could explain why additional redundancy in cell cycle proteins is required. This is what we aim to discover. But the important thing is that how these cell cycle proteins interact together, their functions within the cell, how their expression is temporally regulated and the sequence of cellular events that they control, all these things are conserved throughout eukaryotes. Hence the results obtained in yeast will guide our work on mammalian cells, and should considerably accelerate our understanding of how human cells make decisions. We have already started scrutinizing cell cycle proteins in lymphocytic cell lines, and the first results should be available in a few months.

Q: Can you briefly describe the methodology that you plan to use? Any novel tools?

Sylvain: Even if scientists have already identified the core regulatory proteins, we still don’t know which signal or which signals trigger the cell cycle. There is accumulating evidence that our inability to identify functional modules within the cell cycle network of proteins stems from our lack of quantitative information on those proteins. In other words, in order to understand ‘why’ a cell commits to division or not, we need to know more than only ‘who does what’ (the proteins and their functions): we also need to know when, where, and how much. This requires temporally- and spatially-resolved accurate quantitative measurements of protein parameters, such that their absolute concentration in the cellular compartments, how they aggregate, how fast they move, and also how these parameters are modified throughout the cell cycle, and following extra-cellular stimuli.

In this purpose, we will use recent advances in fluorescence microscopy that provide such quantitative data at the subcellular resolution, in real time and in live cells. Those quantitative bioimaging techniques are based on the detection of single grains of light (termed photons), with high sensitivity, and on the analysis of the fluctuations over time of the detected signals. Quantifying for instance concentration, interactions and dynamics of the core cell cycle proteins from the cell birth to the exact moment when it commits to division, and using this unprecedented data to build mathematical models of the cell cycle control will allow us to formulate quantitative determinants of the decision to divide in single live cells. Then, we will probe how environmental cues, for instance nutrients, glucose, oxygen pressure, and other cell fate signals like mitotic factors, growth factors or differentiation-inducing factors, modify those determinants. This will tell us exactly how, quantitatively, other cell fate signals manage to put the cell division cycle ‘on-hold’ in order to implement a cell decision other than division. And at the same time, we will get insight on how disease-associated mutations manage to disrupt this control, leading to unscheduled proliferation in cells that become irresponsive to the other factors that normally halt the cell cycle.

Q: What is the significance of this plan to childhood leukemia? Do you foresee any possibility for preclinical or clinical applications of your findings?

Leukemic cells often show genetic alterations in both cell cycle proteins and differentiation factors, that are co-selected for during cancer evolution. This strongly suggests that leukemic cells need to disrupt this coordination between the cell cycle trigger and differentiation regulators. Current chemotherapies almost always aim to reduce proliferation, but without any specificity to cancer cells and this can seriously affect healthy cells as well, leading to systemic toxicity. In addition, ‘silent’ leukemic cells that are not actively proliferating but may re-enter the cell cycle later on, leading to relapse, are insensitive to anti-proliferative drugs. We think that if we understand in depth how different cell fates are coordinated, or how cells make the decision to divide including after having spent a long time in a silent state, we will be able to find pharmacological targets or combinations of targets that will affect specifically the cancer cells, and also prevent relapse.

This is probably a bit early to talk about preclinical applications, however we have used the same methodology in yeast and discovered new quantitative determinants of the commitment to division. Using these results, we identified a single point mutation that renders yeast cells hypersensitive to glucose supply. This is a proof-of-principle that our approach can predict ways to differentially control the proliferation of cells with slightly different genotypes, using an environmental signal (glucose supply in this seminal work). We expect to be soon able to predict similar genotype- and environment-dependent proliferation defects in human cells, which we will use to target differentially healthy and leukemic B-cells.